In this piece, industry veteran Phil Cook makes a number of good points about the current state of the p&c market in Canada. Cook makes the distinction between a hard market and a difficult market, sharing that he is not yet convinced that we are currently in the thralls of the former.

He notes: “Hard markets are really only properly identified with benefit of hindsight. It is very difficult to say in the first year of a hard market that you’re in a hard market, because it only really becomes apparent after one, two or three years that this is the beginning of a hard market. By 2022…we can look back and say, ‘Yes, it was a hard market’.”

He makes a good point. When you are on top of a mountain, you know you are on top – you just have to look around. But because of the relative nature of the term, you won’t know if you are in a hard market until after the fact. The term ‘hard’ is a comparative, and all information has to be in before any final determination can be made.

This is why those in the know are deferring the pigeon hole of “hard market”, opting instead to use such adjectives as hardening, firming, correcting, turning and realigning.

While a hard market is a difficult market, a difficult market is not necessarily a hard market. There is hardening and there is hard (with the later being a superlative) but we won’t know where we are until after the fact. Of course, there is no hard [pardon the pun] and fast definition of a ‘hard’ market, and this absence adds another layer of uncertainty to the matter.

In a presentation given at the Insurance Institute of Canada’s Industry Trends & Predictions: 2020 breakfast held in Toronto January 16, Cook provided his take on the typical industry market cycle:

Hard and soft markets are not the same as market cycles, Cook said in his presentation. The industry is always in the middle of market cycles, which tend to last about three to five years in North America. There’s no middle ground in market cycles – they are going one way or another. 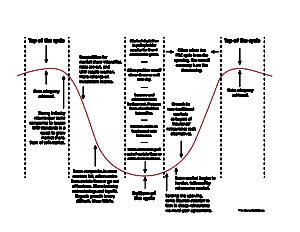 My take on the cycle is that it behaves like a wavy continuum, with the crest of the wave being the hard market, the lowest point being the soft market, and everything else being the various stages in between. Cook is right that the market isn’t binary, it doesn’t just flip from hard to soft and vice versa like a light switch. There is normally a multi-year transition between the two, where the market is either leading to or away from a hard market and away or to a soft market, with relative periods of stability in between.

The graphic here, which I created for a CU piece some years ago and was published with permission in the Financial Times of London’s Reinsurance Survey the day after 9/11, was meant to be an archetype of the mechanics of the insurance cycle (i.e. a show of general tendencies) and not exactly representative of how things play out each and every time. Every market cycle is different in some way or another.

This graphic was part of an article I wrote about the insurance cycle titled What Comes Around…(July 2001). I have parked a PDF of the article here for anyone that may be interested in reading how the insurance cycle used to work. With the latest soft cycle lasting an unprecedented decade-and-a-half-plus (Zurich Insurance commented that it hasn’t seen the current market since about 2002), it may be safe to say that market cycle dynamics of the past are all but dead.

Indeed, this latest market correction seems to be a fair bit different than anything we have seen in the past, and this is where my and Cook’s concurrence begins to diverge a little.

He doesn’t believe we are currently in a hard market because neither of the main indicators – combined ratio and return on equity – are showing that we are quite ‘there’: 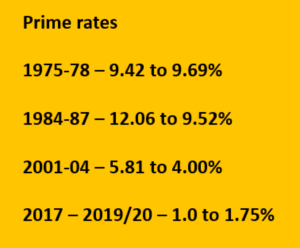 This is where I have a bit of a problem with Cook’s argument, largely because of today’s vastly different interest rate regime. Essentially, the 110 combined ratio goalpost has to be moved. 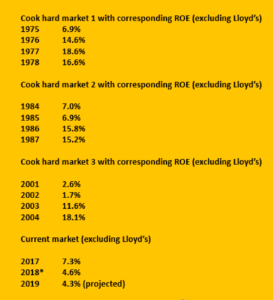 In the case of the first three of Cook’s career hard markets, ROEs were weak at the start but improved dramatically by the end of the stated period – likely largely due to increased premiums and deductibles. This, however, isn’t the case with the current market turn, though, as ROE began rather weak and is weakening further, dropping almost 3 points from 2017 and 2018 and projected to dip a bit further still for 2019. So is this the sign of a hardening market or, perhaps, something else?

We do have to keep in mind one thing when comparing present day ROEs to those of the past, particularly the distant past: The way in which unrealized gains are now put in the books has changed quite significantly due to the implementation of IFRS in 2010/11. Comparing contemporary ROEs with those posted prior to IFRS would no longer be apple to apples.

Are we in the grips of a hard market, a hardening market or something else? Effective arguments might be made on all sides, though hopefully everyone can agree that we don’t have enough information to make an absolute determination right now.

But one thing may be obvious – we might be in the midst of one of the strangest – if not the strangest – market ever. And I believe that what we are currently experiencing might merely be a preview of how we can expect markets to play out going forward.

Back in the day, the tide seemed to rise or sink all boats. That is, the market for all major lines of p&c insurance seemed to go up and down in fairly close tandem, like a monolith. Though each of the lines had its own sub-dynamics going, capital was capital, and it was deployed or re-deployed in basically the same way and at the same (slow) speeds across all major lines.

But now, we have a much more robust and finely-tuned ability to analyze results in a very granular fashion thanks, in large part, to sophisticated finance, actuarial and capital models, and allocate/reallocate capital faster and in a less reactionary way than in the past (invisible but formidable competitive market forces notwithstanding).

Today, this ability more resembles a finely-honed surgical laser than the blunt instrument it once was.

Hence, the market is difficult, but only for some accounts, for some lines, in some places. Sweeping across-the-board market corrections may be a thing of the past. The market, as Guy Carpenter describes in its look at January 2020 reinsurance renewals, is “asymmetrical” or, as Willis Re has called it in its annual review, divergent.

Rather than a rising tide lifting all boats, it now depends on where the boats are in the locks or whether they are even in the canal at all.

Whether this can even be considered a hard or hardening market is, as far as I’m concerned, still up in the air.

With this piece being too long as it is, here are just a few observations about current market conditions, including how today’s market differs from those of the past:

The post Hard, harder, hardest: Where are we in the cycle? appeared first on insBlogs.