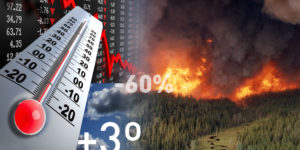 There is an old joke that has a young Senate intern at a fairly high-level Washington, D.C. cocktail party. The intern approaches a four-star general standing alone and engages in small talk.

“Wow, that’s a lot of medals you have there. So tell me, how did you get that one,” pointing to a Silver Star.

“Well, to tell you the truth” says the general “I got that one in error.”

“Oh,” replies the intern, “so how did you get the others?”

“Well, I got them because I got the Silver Star” he replies.

This is similar to how many climate change deniers argue that “bad” climate science is being propagated by non-science, public policy-based government institutions, regulators, quasi-regulators and private corporations.

According to deniers, who intentionally leverage disdain of the UN held by some members of society, the UN’s Intergovernmental Panel on Climate Change (IPCC) is portending a dire climate future in a diabolical plot to “transfer wealth” from rich individuals and states to the world’s poor.

In order for this anti-UN/anti-climate-science rhetoric to grab hold, it is crucial that part of the spin be that those using the ”flawed” IPCC science are naïve entities that fell for a scam or, alternatively, are themselves in on the ruse.

Now proving the climate science is legitimate cannot be done properly in a brief space, and doing so is not the intention here.

Suffice to say, however, that there are two major reasons why climate science is not likely wrong (and not part of a grand conspiracy of some sort).

In his book “The vast machine”, Dr. Paul N. Edwards, a professor of Information and History at University of Michigan, writes that while one should “never say never”, there are two main reasons why the climate science is not likely wrong.

First, he notes, the scientific consensus on climate change is supported by many relatively independent disciplines, each with many different lines of evidence from their own methods, measurements, models and modes of thinking. Second, a large community of experts at the IPCC – including individuals, governments and NGOs of every stripe – routinely examines every alternative theory and line of evidence and comes to a consensus on the findings.

But the intent here is not to prove the accuracy of climate science. The intent is actually to push aside the science for a moment and quickly consider just some of the fallout that is being felt as society both learns – and experiences – more about the change in the climate that is currently underway.

Central banks around the world are ringing the alarm about the impacts of climate change. Recently, Governor of the Bank of England Mark Carney ominously warned that firms ignoring the climate crisis “will go bankrupt.”

Public companies are under immense pressure to fully and formally disclose to shareholders, regulators, rating agencies, lenders, customers and others their current and potential exposures to climate change and their plans to address the risks this exposure presents.

Rating agencies are beginning to take climate risk into consideration when they analyze investment instruments, companies, and governments of all levels. Moody’s Investors Service this past July acquired a climate data firm to aid it in this work.

Oil deals are being cancelled as fear of further price drops and the specter of ‘stranded assets’ become real.

Insurers and reinsurers are pulling coverage from such things as Canadian oil sands projects. In the last few weeks alone, it has been reported that Axis Capital, Zurich Insurance and Munich Reinsurance will all stop covering Canadian oil sands infrastructure and pipeline projects.

Pension plans and other investors are dropping investments by the billions as they decarbonize. Just two weeks ago, the European Investment Bank dropped all investments in fossil fuels. Since 2013, the Bank has funded almost CAD$23 billion of fossil fuel projects, about CAD$3.4 billion last year alone. At around the same time, Sweden’s central bank announced that it will no longer hold Province of Alberta bonds due to Alberta’s high per capita CO2 emissions.

The list of such impacts goes on and on.

To maintain that these sophisticated groups, many with their own weather and climate experts, analytics departments, models, access to information and experience, have either “fallen” for corrupt climate science – or are themselves part of a “grand conspiracy” – is patently absurd.

So if you truly believe that climate change is a hoax, it is strongly suggested you think again.

Climate science is ignored not only at your physical – but also at your financial peril.

The post We ignore climate science at our financial peril appeared first on insBlogs.